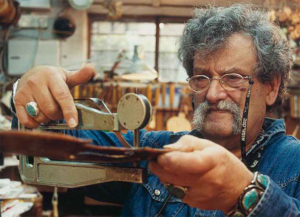 Amnon Weinstein has spent the last two decades locating and restoring violins that were played by Jewish musicians during the Holocaust. He dedicates this important work to 400 relatives he never knew. These grandparents, uncles, aunts, and cousins stayed behind in Eastern Europe when Amnon’s parents, Moshe and Golda, immigrated in 1938 to Palestine, where Moshe opened a violin shop. After the war, Moshe learned that his entire family—400 in all—had been murdered during the Holocaust. The pain of this discovery led to his first heart attack. Moshe never spoke of his family again. When young Amnon would ask Golda about their relatives, she would show him a book about the Holocaust. Pointing to the ghastly photos of the dead, she would say, “This is our family.” She would break down in tears, unable to explain further.

After growing up to become one of the most respected violin makers in the world, Amnon became determined to reclaim his lost heritage. He started locating violins that were played by Jews in the camps and ghettos, painstakingly piecing them back together so they could be brought to life again on the concert stage. Although most of the musicians who originally played the instruments were silenced by the Holocaust, their voices and spirits live on through the violins that Amnon has lovingly restored. He calls these instruments the Violins of Hope.

Learn More About Violins of Hope