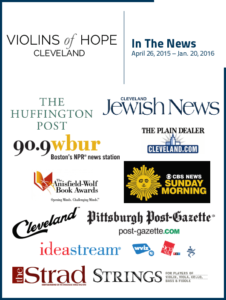 Historic “Violins of Hope” come to Greater Cleveland this fall

Community collaboration to offer concerts, exhibitions and educational opportunities centered on the role of music and musicians during the Holocaust

More than a half dozen organizations across the community have come together to bring the historic Violins of Hope to Northeast Ohio this fall. Played before and during the Holocaust, the instruments have been painstakingly restored and serve as testaments to the resilience of the human spirit and the power of music to lift hearts in even the most horrific of circumstances.

Among the organizations inspired to partner on a project combining performances, educational programs and a major exhibition are: The Cleveland Orchestra, Case Western Reserve, the Cleveland Institute of Music, Facing History and Ourselves, ideastream, the Jewish Federation of Cleveland, and the Maltz Museum of Jewish Heritage.

“The opportunity to bring these extraordinary instruments to Greater Cleveland immediately united organizations and individuals across the region,” said Richard Bogomolny, Cleveland Orchestra chairman of the board and one of the leaders of the Violins of Hope Cleveland effort. “A profound personal story lives within each violin, and together they possess the potential to leave an indelible impact on every person who sees and hears them.”

Details about all of these programs and events, including ticket information, will be available this summer.  More details about the project and associated activities can be found at violinsofhopecle.org.

Amnon Weinstein, a second-generation violin-maker based in Tel Aviv, Israel, has collected and repaired more than 45 Holocaust-era violins from around the world, some with the Star of David on the back and others with names and dates inscribed within the instrument. The violins have been played in concerts around the world, most recently by the Berlin Philharmonic in late January of this year.

The Cleveland visit will mark the violins’ second trip to the U.S. The violins first came to this country in the spring of 2012, when the University of North Carolina Charlotte hosted a two-week visit. UNC Charlotte musicology professor James A. Grymes published Violins of Hope: Violins of the Holocaust – Instruments of Hope and Liberation in Mankind’s Darkest Hour last year and is curating an exhibition of the violins at the Maltz Museum of Jewish Heritage that runs from Oct. 1 through Jan. 3, 2016.

Among the highlights of Violins of Hope Cleveland will be a September concert featuring The Cleveland Orchestra, under the direction of Franz Welser-Möst, which will dedicate newly renovated Silver Hall, part of Case Western Reserve’s Milton and Tamar Maltz Performing Arts Center at The Temple – Tifereth Israel.

“These violins carry extraordinary meaning across generations,” said Milton Maltz, one of those who catalyzed the effort to bring the instruments here. “To have members of one of the world’s finest orchestras play them in the newly renovated Silver Hall, and also have them available to view at the Maltz Museum of Jewish Heritage, represents a remarkable opportunity for education of people’s hearts and minds.”

Members of the Cleveland Orchestra will play the restored violins, while the Israeli violin virtuoso Shlomo Mintz also will perform with one of the instruments. The hall is named for The Temple’s longtime leader, Rabbi Abba Hillel Silver, who also was among the leaders in the effort to establish the nation of Israel after World War II.

“We can think of no more fitting way to mark the opening of Silver Hall than this extraordinary concert,” Case Western Reserve President Barbara R. Snyder said. “We also look forward to hosting extensive public programs featuring our faculty and collaborating with the rest of the organizations involved.”

“This is a once-in-a lifetime event for the Greater Cleveland community, and it’s essential to record and document the series of Violins of Hope events and exhibitions,” said Kit Jensen, ideastream chief operating officer. ”The live broadcasts and recordings will amplify the amount of people who can participate in this uniquely historic project, both today and in the future.”

Case Western Reserve faculty already have begun planning lectures and programs that will provide students and the broader Cleveland community opportunities to learn more about the complex role of music in concentration camps and the larger religious, cultural and historical contexts involved. The university’s Laura and Alvin Siegal Lifelong Learning Program will play a pivotal role in outreach across the region, and also will join with the Department of Judaic Studies to bring internationally renowned Jewish scholars to speak in Cleveland.

Local students also will have ample opportunity to participate in public programming, and to consider the violins within their classrooms. The Cleveland regional office of Facing History and Ourselves has scheduled teacher workshops and is developing lessons and other materials for Northeast Ohio educators to use. Facing History is an international non-profit education organization dedicated to using lessons from history to encourage students to consider how their own choices can make a positive impact on society.

“These violins are a dramatic memorial to the lives lost in the Holocaust,” said Mark Swaim-Fox, director of the Cleveland office of Facing History. “Learning about their story is an emotional lens that allows students to experience the many ways that Jews in Europe used music to survive and to resist the Nazis.”

The Cleveland Institute of Music (CIM) Orchestra, meanwhile, will present Music of the Violins of Hope, a free concert for the community at Severance Hall on Oct. 14 in which CIM students play the restored violins from the Holocaust. In addition, CIM will present several faculty and student concerts featuring chamber music of the time, including music written by composers held in concentration camps. CIM’s Distance Learning program will support the project’s education efforts with offerings that prepare students and area residents for their visit to the exhibition and concerts.

“The Violins of Hope will serve as a reminder to us all of the timeless power of music over adversity,” said Joel Smirnoff, president and CEO of CIM. “The Cleveland Institute of Music is proud to partner in bringing these historic instruments to Cleveland and in bringing their sound back to life for our community.”

The breadth of activities planned for Violins of Hope Cleveland touches multiple elements of the mission of the 112-year-old Jewish Federation of Cleveland—perhaps most significantly in the organization’s commitment “to promote the well-being of our community.”

“The Jewish Federation of Cleveland is thrilled and proud to be a partner in bringing the Violins of Hope to Cleveland. Through this program, our entire community will have the opportunity to learn about the enduring lessons of the Holocaust–not only the tragedy brought about by baseless hatred but also the resilience of the Jewish people,” said Hedy Milgrom, vice president for endowments and development at the federation. “One manifestation of that resilience is embodied in the violins owned and played by thousands of Jews, most of whom perished, but some of whom survived. These violins were played throughout the years of the Holocaust—because where there was music, there was hope. And through these violins, the Jews who perished are immortalized and serve as an inspiration for us today.”